A woman was being charged with stealing a loaf of bread. She seemed to have good cause. She was poor and taking care of her daughter and two grandchildren after their father had abandoned them.

Unfortunately, the shop-keeper refused to drop charges. He felt that because it was a bad neighborhood, if one person stole and got away with it, then it would encourage more to do so. He feared for his safety and his business, and he wanted to teach all the other people in the neighborhood a lesson.

And he certainly did do that, though not in the way he had envisnioned...

See, the Mayor of New York, Fiorello LaGuardia, was known for occasionally stepping in as a magistrate of the court. He would preside over certain cases of special interest. He was well-loved by many and known for being a firm yet fair mayor.

In this instance, Mayor LaGuardia stepped to the front of the courtroom, placed his famous hat down, and prepared his ruling:


"The shop-keeper is correct that you have broken the law and that you must be punished. You will spend 10 days in jail or pay a fine of ten dollars."

Back then, $10 was a hefty sum of money. The woman knew she was going to jail, and the shop-keeper was quite happy with this outcome.

But nobody could have imagined what would happen next...

Something interesting was brewing inside Mayor LaGuardia's head. And as he spoke the woman's sentence out loud, he slowly pulled from his pocket a $10 bill. He placed it into his famous hat and stated that her fine was now paid.

The look of shock on the shop-keepers face was priceless!

How could the mayor betray his people like that? The businesses who paid the taxes of the city and helped keep it running?  Meanwhile a poor, law-breaking, thieving woman was being let off scott-free without any punishment whatsoever?

Nobody understood that, until Mayor LaGuardia issued his second sentence for the afternoon:

"In addition to the $10 fine this woman has now paid, I fine everybody else in this courtroom fifty cents."

The room gasped in shock as he continued...

"For living in a town where a grandmother must steal bread just so that her daughter and grandchildren would not starve to death. Bailiff, please collect the fines right now..."

"And give them to the defendent."

P.S. Although this story is believed to be true, it has remained unverified even by Snopes. Fact or fiction? I don't know.
Posted by Unknown at 8:41 AM 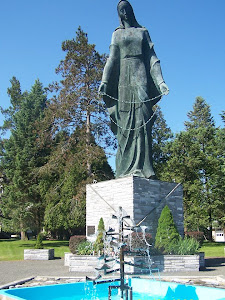